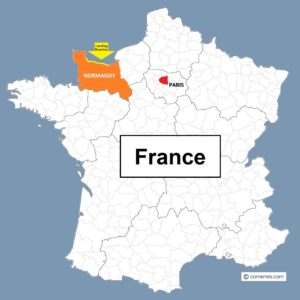 Normandy is a region in the northwest of France.

It is connected to the capital by a famous river: the Seine

Normandy has 373 miles of coastline along the English Channel facing England.

It is a region that is known in the world.

The most famous is the Mont Saint Michel.

It is one of the 10 most visited tourist sites in France.

In Normandy you can visit the house and the gardens of Claude Monet, the father of Impressionism.

You may also have heard of Deauville. It is a  little seaside town known for its luxury shops. Many Parisians come here on weekends to relax.  Every year in September, the American Film Festival takes place in Deauville.

In Normandy you also find the tallest cathedral of France which is located in Rouen. You will find a particular architecture with timber-framed houses in many small villages and pretty little harbours, like Honfleur. Facing the sea, the high limestone cliffs of Etretat are typical of the French coast.

And of course it was in Normandy that American, British and Canadian soldiers landed on June 6, 1944. Many battle sites are to be seen. We will come back to this in more detail later on.

THE WEATHER IN NORMANDY

The climate is similar to the English climate.

Winters are cold. Summers are cool and humid in the morning. In the afternoon the temperatures are relatively warm with average temperatures of 73.4 °F  to 77° F

Rainfall is relatively abundant with an average of 123 rainy days per year.

That’s why the French say it rains all the time in Normandy.

However, rainfall can vary from one point to another in Normandy, depending on whether you are on the coast or inland. On the coast, therefore at beach level, the winds sweep over the clouds and there is usually a little more sunshine.

In terms of gastronomy, Normandy is famous for its cheese, apples, alcohol and its seafood (scallop)